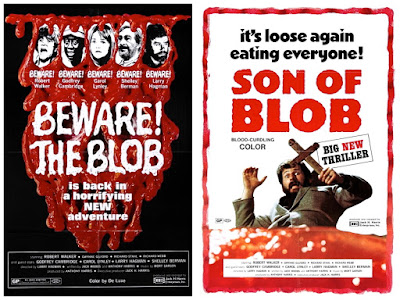 You'll crack up at this wacky sequel to the 1958 Steve McQueen BLOB movie! Also known as SON OF BLOB, it was directed by Larry Hagman (Dallas' J. R. Ewing!) and stars Robert Walker (of Ensign Palmer, son of Robert Walker of Strangers On A Train) and Tuesday Weld-wannabe, Carol Linley in a goofy updated remake with much humor, fun-loving hippies and many cameos!  Cindy Williams (before Laverne and Shirley) plays a pot-smoker, Godfrey Cambridge as a construction worker who brings the Blob back from the arctic, Shelly Berman as a barber, and many more. Larry Hagman and Burgess Meredith make an appearance as a couple of homeless gentlemen. It should be better remembered than it is.
Posted by RURAL WAR ROOM at 9:34 AM