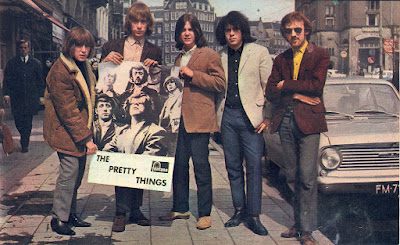 Phil May (center, above), lead singer of one of our favorite UK 60's bands, The Pretty Things, has died in hospital from complications of an emergency hip surgery after a bicycle fall. Nearly unknown in the US, the Pretty Things were a very popular British blues-rock band who went psychedelic with the first rock opera, S.F. Sorrow. Here they appear under the alias the Electric Banana in a swinging London movie, What's Good For The Goose. We play a lot of The Pretty Things on the Rural War Room Radio Show.

A new unreleased documentary on the Pretty Things called, Midnight To Six, is set to premiere in Los Angeles later Summer 2020.