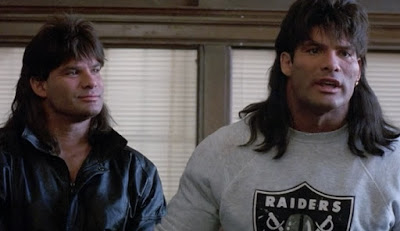 David Paul & Peter Paul are twin bodybuilders who came to fame in a Conanesque film, THE BARBARIANS,  and are sometimes referred to as the Barbarian Brothers. They've always reminded me of Steve Vai's larger mutant brothers. They made a surprising amount of films. In DOUBLE TROUBLE, they play brothers on opposite sides of the law, teaming up to defeat a larger and more dangerous Crime Syndicate. It was directed by John Paragon, "Jambi" from Pee-Wee's Playhouse. The stellar cast includes Roddy McDowall, James "Scotty" Doohan, Troy Donahue, Billy Mumy, Lynne "Miss Yvonne" Stewart, and the mighty David Carradine. A Family Film.

Posted by RURAL WAR ROOM at 10:24 AM Links to this post